Millions Worth of Art Stolen from Dutch Museum 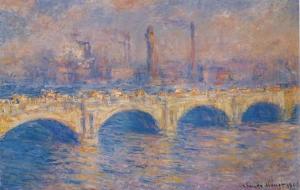 Early Tuesday morning, millions worth of art was stolen from the Kunsthal Museum in Rotterdam, the Netherlands. The museum is currently showing a collection of works from the Triton Foundation in celebration of its 20th anniversary. The paintings were some of the most valuable in the collection. Previous auction prices are listed after titles:

Just looking at previous prices, the total value of the stolen work is at least $36 million—but today it’s probably much more. The thief, however well prepared to pull off the heist, won’t be able to auction them legitimately, though. All of the paintings taken have been reported to The Art Loss Register, which is in charge of tracking stolen artwork. All art is verified at legal auction houses to make sure it’s a) real, and b) not stolen. Sale on the black market is possible, of course, but the seller would only be able to get about 5-10% of the real value.

The museum is currently working with police to investigate the robbery, which is the largest art theft since 20 paintings were stolen in Amsterdam in 1991. They are currently reviewing videotape footage and asking for witnesses to come forward.

Culture can mean many things: it can be your language, your food, your clothing, your religion, etc. Here at Cultivating Culture, however, we cherish the aspect of culture that inspires: we love the arts. We highlight museums, galleries, organizations, and individuals that have dedicated their lives to supporting the arts. We celebrate the facet of humanity that has brought “order out of chaos,” and we invite you to join, or to enjoy.

We are still a growing community, but we hope you stay tuned in the coming weeks for more information, news, articles, and appreciation of how our world cultivates culture.

We are a participant in the Amazon Services LLC Associates Program, an affiliate advertising program designed to provide a means for us to earn fees by linking to Amazon.com and affiliated sites.